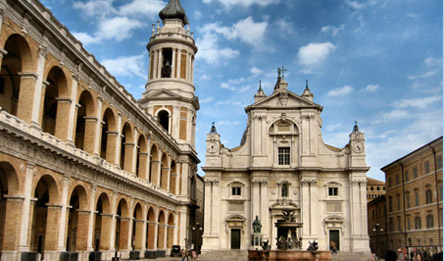 Loreto is a little town close to Numana where you can admire several religious attractions such as the famous Black Madonna inside the huge cathedral and Jesus’s mother house, brought here by the Angels according to the ancient narrative. Since the XIV century Loreto is a pilgrimage destination from all over the world. The majestic dome of the cathedral is visible from great distances, is situated on the hill of Loreto rich in olive groves, vineyards, grain, as if to demonstrate autonomy and well-being for a long time.
Trivia: thanks to continuous influx of pilgrims here has grown since long times know-how related to the production of sacred objects then integrated metalwork with particular reference to silver resulting in the birth of the silversmiths of the district that also includes neighboring countries as Recanati and Castelfidardo. You can still find the old artisan shops on Coronary street.
Today, the pilgrims reach four million visitors a year and such illustrious predecessors remember Galileo Galilei, Alfieri, Casanova. There are reports that Mozart has purchased a small statue of the Virgin Mary as a souvenir for his mother who gave him explicit request. Guarded in the Apostolic Palace of Loreto are treasures such as the works by Lorenzo Lotto and Pomarancio. Very impressive also the alternative route to reach the Basilica, the 400 steps that traditionally purify the body and especially the spirit. The walk is pleasantly interrupted’s 15 shrines containing the bronze panels created by GuarinoRoscioli from Montottone.